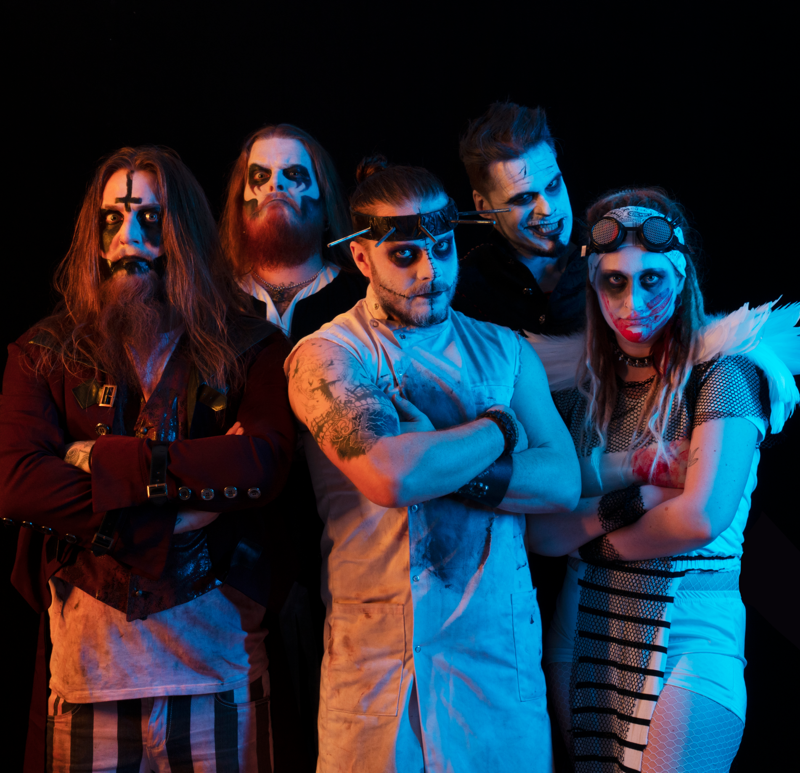 Many uncounted years have passed since the world was consumed in fire and water. Now the lost tribes of humanity drift across the hot dunes, driven to despair and savagery in the battle for survival. But you seek something greater, a higher purpose.

Your quest takes you through the ravaged wastelands of hollowed-out cities, the endless deserts of civilisation’s demise, until at last you come upon a scrap metropolis, rising from the ground like a great metal god. The entrance is guarded by the huge effigy of a crucified Scarecrow, and a cloud of black crows scatters from its up-raised arms, cawing noisily to herald your approach. As you enter the city walls you begin to hear another sound, a tribal rhythm that calls to something deep inside you. You follow as it grows louder and louder.

You find yourself inside a vast amphitheatre. Thousands of people move in unison, their hands raised in horn symbols towards five figures who stand elevated on a dais before them. The gathered crowd are dressed in strange armour made from scavenged parts - here a robot crafted from an air conditioning unit, there a car door turned into a crab carapace. The music is so loud now that it fills your mind, blasting from the great black towers that stand on either side of the stage. As you watch and listen, you find you cannot help but dance, your body driven by an urge as ancient as time itself. You don’t understand what’s happening, but you feel something you haven’t felt for a long time. You’re having... fun...

“… as you’re headbanging to this majestic metal madness, be aware that you might be doing so in the presence of a band who could one day help British metal take over the world again!” Planet-Loud

“Evil Scarecrow… find themselves on the brink of being a genuinely significant concern on the British scene…” Dom Lawson, Metal Hammer

“We had the most people in the history of Bloodstock get up early especially to see Evil Scarecrow play! If that isn’t testimonial to how incredible this band is, I don’t know what is! Stunning live band…” Vicky Hungerford, Bloodstock Open Air

Evil Scarecrow’s live show has been captivating, delighting and surprising audiences for many years. From the local pub to the main stage at Bloodstock Festival, it has grown bigger, louder and sillier with each year of success. More than just a metal gig, an Evil Scarecrow show is a performance, a piece of bizarre rock theatre unlike any you’ve seen before.

Famous for their ‘Blue Peter’ props, gregarious characters and catchy metal anthems, the band have gone from strength to strength. As well as regularly touring big venues across the UK, they’ve entertained fans at HRH Road Trip in Ibiza, Wacken Festival in Germany, and Summer Breeze Festival in Bavaria.

Everywhere they play, their cult grows - and their fans are dedicated and enthusiastic. It’s not an Evil Scarecrow crowd without a few cardboard robots, foam crabs and other hilarious homemade props raised aloft. Crowd participation is just as important as what the band does on-stage, and the whole experience is a truly immersive one that will challenge even the most cynical to not join in.

In late 2018 the band released their 4th full-length album, Chapter IV: Antartarctica. This was followed by the Lost in Antartarctica Tour, which played to huge audiences all across the UK.

In 2020 the band will be touring with a new show, playing fan favourites from their full catalogue. In the meantime, rumours of a new album can neither be confirmed nor denied...