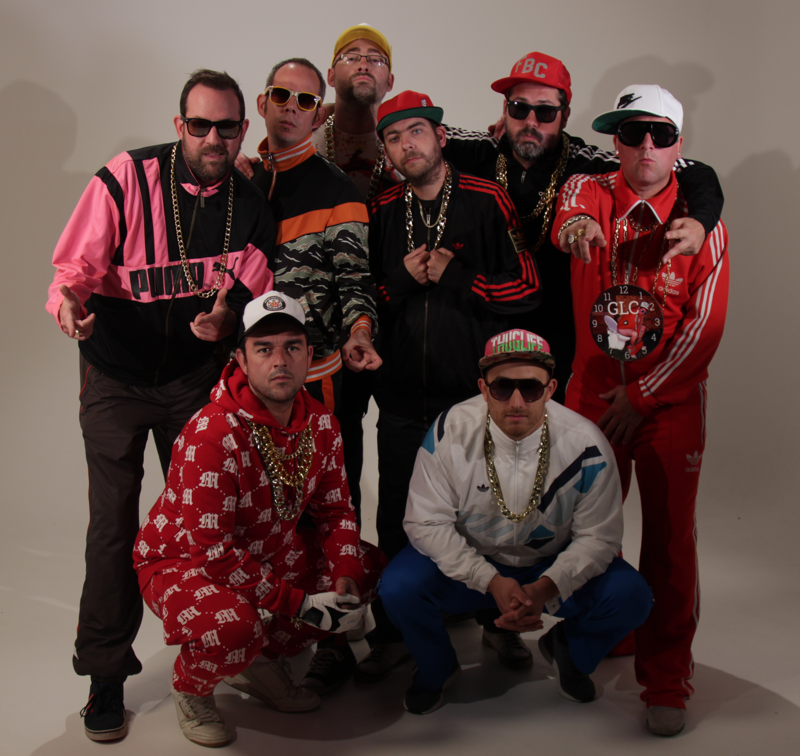 They’re the Newport rap maestros who blasted their way onto the music scene in the early Noughties with their flammable-looking trackie tops and even more incendiary beats.

They just celebrated their 15 year anniversary in 2019 - including a World Tour Of Wales. Get your shell suits ready, this is going to be a wild ride!

After a string of self released (and now heavily bootlegged) albums, Goldie Lookin Chain finally broke big in the summer of 2004. Subjected to a bidding war from several major labels, the band signed to Atlantic Records earlier that year, and released the now legendary Greatest Hits album, which reached no 5 in the UK album chart and spawned four top forty hits including the number three smash Guns Don’t Kill People, Rappers Do. The band’s success continued to grow, with appearances at a series of major UK and European festivals as well as a string of headline UK and European tours.

2005 saw the release of the top twenty album Safe As Fuck, which once again littered the charts with a new collection of party anthems including the titanic Your Missus Is A Nutter and the romantically tinged RnB. Once again, touring as far afield as Japan, the USA, and a plethora of UK festivals kept the show on the road, and the party continued to grow into a worldwide phenomenon.

The GLC’s popularity continued to spread, yet outrage was sparked when, in 2006, after selling eighty thousand copies of Safe As Fuck, the major label bigwigs decided to drop the band and concentrate on other, more namby pamby acts (granted, You are Beautiful is a song that has spawned a thousand children, broken a million hearts and crushed over a billion souls). Fans across the globe were outraged and messages of condolence and support came flooding in from as far a field as Tokyo, Los Angeles and Cwmbran, the home of south Wales’ finest under cover shopping centre.

Nonetheless, the band where not disheartened and put themselves into a self imposed exile whilst deciding which step to take next. During this time, self-sufficiency became the key and the GLC discovered the true meaning of the term ‘rugged individualism’. A communal house was rented in Newport, and the band went back to the drawing board, creating a new catalogue of musical delights.

By day, members of the band worked simple jobs in order to keep the GLC cogs oiled and running smoothly. Not even illness and a near death experience could slow down the creative whirlwind that was going on behind the doors of the residential equivalent of Abbey Road. Samples were replaced with real instruments, scribbled lyrics became word documents, and at one point the band even worked towards creating the ultimate male voice choir.

With the self Released ASBO 4 Life, GLC took it back from the now crumbling major Labels and continued to rock hard, followed up by the now legendary "Mixtape 2" and one of the uks most Christmassy Christmas albums "Its a Goldie Lookin Christmas (The Fairytale of Newport)" GLC continue to rock Live music venues and international Festivals the World over.