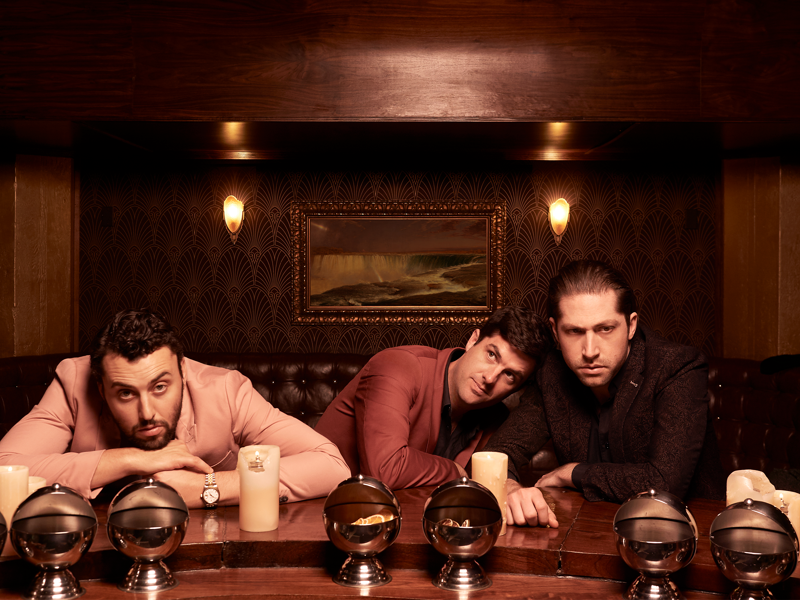 MINI MANSIONS Guy Walks Into A Bar... Mini Mansions are the type of gang whose charm lies in their individual idiosyncrasies. A trio of partners-in-crime, best friends and brothers in all but blood, Michael Shuman, Zach Dawes and Tyler Parkford’s unique personalities are reflected in their third forthcoming album Guy Walks Into A Bar… A record that examines the kind of hip-swaying rock'n'roll you’d find on a dive bar jukebox, it sounds happily disaffected by trend, time or place, like the titular joke itself. There are a hundred different kickers to that joke, but this time around the joke's on them. A guy walks into a bar only to face reality. “It started off as a joke because it is a joke,” says Shuman of the title. “It's a way to start off the story of a relationship that ends up getting much deeper.” The album has been a labour of love individually and collectively. In terms of the former, the lyrics on the record penned by singer/guitarist Shuman are the most hardhitting, self-reflective he's ever shared, and all informed by a whirlwind relationship that's since dissipated. His ex-fiancee came into his life after one such night out, and he wrote most of the songs here contained in real time while on the road. As they reveal each stage from beginning to end, the songs change in mood and even specific setting as the relationship itself deteriorated. “Tears In Her Eyes”, for example, was rewritten later to become a break-up song once the engagement was off. Shuman admits that it was a very navel-gazing exercise writing this, but it's taken on a new lease of life as a relatable catharsis for anyone who's ever had the ground pulled from under them. “The record became something else that you could give to anyone and ask: Did this happen to you?” Shuman says. “Most people have the same story I had. It's nothing new. But it's very special, and I hope everyone sees that we're trying to be vulnerable on this record.” Co-writer Parkford’s additions helped to complete this story and fulfill the band’s efforts to make a record that any love-fool can identify with. Parkford’s own personal narratives include the playful late night romp “Don’t Even Know You”, the bombastic dance anthem “Forgot Your Name” and their EP title track “Works Every Time.” “I see the future/but it never had a child or wife,” goes the lyrics on second track “Bad Things (That Make You Feel Good)”. The album progresses from reckless antics to the serious trappings of starting to care for a person you've connected with, falling in love, then swiftly and dramatically falling out of it. There's a push-pull between the nocturnal whimsy of being freewheelin' dudes, and a fear of adulthood as the threesome become fully grown men. Elsewhere, the album has been a real test for the three best pals. During the writing of this record they almost disbanded – in short – life was just getting in the way. What brought them back? “The EP,” says Shuman. That EP - titled Works Every Time - came out in September 2018 and provided a bridge between saying goodbye and taking care of unfinished business. “We were like, 'OK let's just do four songs, give it one more try, see how it feels, all-forone-and-one-for-all,'” recalls Shuman. While all three of them are occupied with other gigs (notably Dawes plays in The Last Shadow Puppets, Parkford in Arctic Monkeys and Shuman still plays bass in Queens Of The Stone Age), Mini Mansions is their priority. Earlier this year in Barefoot Studios in Hollywood, they approached making a record so much differently from before. “We had pushed the cocktail kit to places nobody had really seen before in a rock act,” Parkford adds “And it was an important part of our growth and presence, but we needed to find something new.” They flipped the script by kicking the cocktail kit and bringing in an outside drummer. Shuman’s bandmate and friend Jon Theodore (Queens of the Stone Age, Mars Volta) graciously entered the picture. Theodore's drumming was a revelation to them. Suddenly Shuman, who was also their drummer previously, especially felt so much freer to make musical decisions and be more involved in the melodies. “Everyone's multitasking was stripped back and there was a fuller sound,” explains Dawes. “Now we don't know why it took so long to figure that bit out.” The result is their sleekest, most direct and downright poppiest effort to date. Coproduced by Shuman and long time collaborator/mixer Cian Riordan, there are some additional familiar voices dotted in with a duet with The Kills’ front woman Alison Mosshart on “Hey Lover” and backing vocals from Z Berg (former singer in The Like) on “Forgot Your Name” and the disco banger, “Living In The Future”, which sounds like Devo by way of ELO. Despite these collaborations though, Mini Mansions have never felt part of a community in LA. They relish in their outsiderdom. Together, the three cut a very contemporary figure, but there's clearly something very nostalgic about being a touring rock band too. Honestly, there's something nostalgic just about the concept of being a guy walking into a bar. Seeking connection in a real physical space? Imagine that. “We started at a young and very honest place,” says Dawes of their beginnings in 2009. Inevitably whenever they come back together that carefree magic returns. It's an escape, and it's an escape that's contagious and will feed the audience. The biggest takeaway from Guy Walks Into A Bar… is that life's never too tricky that you can't put on a record, have a dance and remember what fun sounds like. “It just feels honest. It's silly and playful and serious all at the same time,” says Dawes. “As serious as the songs get, we don't take ourselves too seriously,” adds Shuman. “We're a fun band.” Thank heavens someone is. February 2019